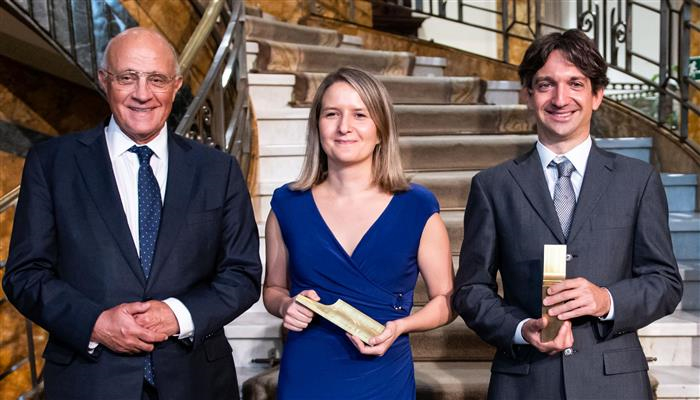 The Chairman of Banco Sabadell, Josep Oliu, presented the Banco Sabadell Foundation Award for Economic Research, which aims to recognise the work of Spanish researchers in the fields of economic, business and social knowledge.

This year, the ceremony took place in the central HQs of SabadellHerrero in Oviedo and has recognised the winners of the 19th and 20th Editions of the Award: Prof. Eduardo Morales and Prof. Mónica Martínez-Bravo, respectively.

“Receiving this award has been an incredible honour. I hope it helps to spread the type of research we carry out in the field of economics, such as for example, the wide variety of topics we cover, the scientific rigour and the empirical approach that oftentimes has our research work”, the award-winning Martínez-Bravo commented.

The Jury of the 19th Banco Sabadell Foundation Award for Economic Research, headed by Josep Oliu, has recognised Prof. Eduardo Morales as the winner of the 2020 Edition for his research into the strategic decisions made by companies and how they contribute to their export behaviour and their capacity for innovation.

His line of research focuses on the field of international trade and, in particular, on the study of businesses’ export behaviour. Furthermore, he has worked in the area of urban economy and applied econometrics. In these areas, his work has focused on developing methodologies to quantify the importance of the information to which companies and employees have access when making economic decisions.

The Jury of the 20th Banco Sabadell Foundation Award for Economic Research, chaired by Teresa García-Milà Lloveras, has recognised the work of Prof. Mónica Martínez-Bravo who was the winner of this year’s edition for her research work in the fields of political economy and economic development and, in particular, for her contribution to the analysis of factors determining the degree of success or failure of democratic transition processes.

Prof. Martínez-Bravo’s lines of research link economics and politics, combining questions of huge interest with models that illustrate and clarify the relevant mechanisms, together with careful empirical approaches capable of estimating causal effects showing their relevance. Her research is considered fundamental to understanding what determines the degree of success or failure of democratic transition processes and expands to topics as diverse and relevant as what can be done to overcome vaccine reluctance or what determines work effort outside conventional work environments.