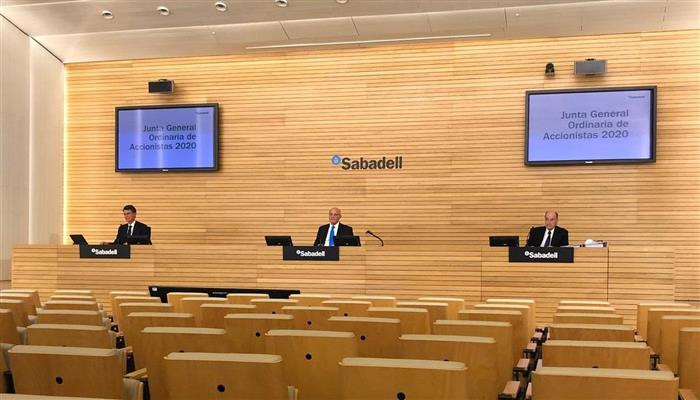 The Banco Sabadell General Meeting of Shareholders, which was held through telematic means and in which 61.57% of its share capital was represented, has approved the management and annual financial statements of the institution’s 138th year and consented to the proposed distribution of 768 million euros in net profit obtained as at year-end.

The Meeting has thus agreed to distribute a gross dividend per share, to be paid out of 2019 earnings, of 0.04 euros per share in cash, of which 0.02 euros were paid as an interim dividend on December 24th and 0.02 euros will be paid on a supplementary basis from April 3rd. Therefore, total shareholder remuneration in 2019 will entail a payout of around 40% and a return of over 7.5%, based on today’s closing share price.

In the Meeting, the reports on non-financial disclosures and director remuneration were also approved, in addition to the appointment of Mireia Giné Torrens as independent director. Ms Giné, who is filling the vacancy left by Teresa Garcia-Milà, has a PhD in economics, a brilliant academic track record in finance and corporate governance, and is a founder and director of Wharton Research Data Services, the world's leading digital platform for financial data and research applications. Her experience in the digital environment and the world of fintech will be a welcome contribution to the Board of Directors of Banco Sabadell.

In his speech, Chairman Oliu spoke of the most important milestones achieved in 2019, and gave his views on the current situation and the bank’s role in this difficult scenario. “Banco Sabadell”, he said, “has concluded the transformation of its risk profile after completing the sale of non-performing assets foreclosed since the 2008 crisis, and it has definitively overcome the technology crisis at TSB.” He later went on to highlight the fact that the bank “has fulfilled its goal of achieving a capital ratio of 12%, and has returned revenues to normality with a business model that has proved to be both powerful and resilient in this complex environment.”

Speaking about the general situation that exists at the moment as a result of the crisis triggered by the coronavirus pandemic, Josep Oliu indicated that “the Bank's main concern from the outset has been to pursue government-based solutions that, with our help, might guarantee that as many companies as possible can surmount this temporary lack of solvency and liquidity.” The Chairman went into further detail on this point, stating that the bank has supported the provision of guarantees for companies to help them cover their losses in this period of sluggish activity. “We have defended”, he said, “the need for these guarantees to enable banks to provide the necessary credit and liquidity without jeopardising their solvency at a time of increasingly stringent capital requirements.”

Oliu also explained that “Banks face this new challenge with a capital position that is a far cry from the situation in 2008, and they have sufficient liquidity. We will therefore be pivotal when it comes to analysing and determining the best ways to help businesses and households overcome this period of difficulty.” He concluded by saying that “Banco Sabadell is mobilised in the fight against COVID-19, ensuring the continuity of payment systems and the viability of businesses, which are essential to our economy.”

The Chairman ended his speech by thanking staff for their effort and dedication and thanking shareholders for their support. He also made a special mention of all healthcare professionals: “I would like”, he said, “to pay a heartfelt tribute to all the health workers in Spain, who, at risk of becoming infected themselves, are working long hours in very difficult conditions to serve society.”

Jaime Guardiola, on the other hand, used his speech to provide an in-depth review of the company’s management, the development of the business and the key figures achieved in the year. He began by referring to the current situation, emphasising that “Our first priority now is to protect the health of our entire team, and of all those with whom we have dealings.” He added that “Beyond guaranteeing that our business and our service to our customers continue as normal, we are committed to supporting families and businesses in these difficult times.”

Speaking about 2019, Guardiola said that it had been “a positive year, in which we achieved good earnings and strengthened our competitive and financial position.” He explained that the year’s performance could be attributed to five main factors: “the improvement in the capital position, the decrease in non-performing assets, strong commercial momentum in all the Group's businesses, the presentation of the new strategic plan of TSB, our subsidiary in the United Kingdom, and firm progress with the commercial and digital transformation.”

The CEO referred specifically to the good performance of core banking revenue, which amounted to 5,061 million euros in 2019. “Despite the ultra-low interest rate environment”, he said, “we have shown an enormous ability to generate ordinary income, thanks to a high level of commercial activity and an active management of prices. These revenues have proved to be extraordinarily resilient in recent years, which is a remarkable achievement in the current interest rate environment, and it is evidence of the soundness of our business model.

According to Guardiola, “the superb commercial performance of all of the Group’s business units has allowed us to achieve this growth in lending and funds during the year.” Of the numerous figures included in the management report, particular note can be taken of the following: at the end of 2019, 52% of SMEs and 68% of large Spanish corporations were customers of Banco Sabadell, the business of corporate banking customers outside Spain had grown by 16%, and the number of digital customers in Spain had already reached 3 million, 6.2% more than in the previous year.

“The year 2020”, said the CEO, “looks very challenging.” In addition to the major challenges inherent in the banking business, there is now the added uncertainty in the economic and social dimensions as a result of the global crisis generated by the spread of COVID-19. However, we have a firm commitment to companies, families and society in general to support them and contribute to overcoming this crisis. “For that reason,” he concluded, “we will continue to do what we have been doing since 1881: providing support to people and companies, anticipating and addressing their needs, both in good times and when things are difficult.”