Banco Sabadell, the only financial institution in Spain to obtain more than 700 points in the EFQM Seal of Excellence

Banco Sabadell has renewed the EFQM 500+ Seal of Excellence awarded by the European Foundation for Quality Management (EFQM), an international organisation based in Brussels, whose mission is to assess and promote excellence in business management in Europe. The institution has once again managed to score over 700 points and remains a superb benchmark organisation in Spain.

According to Marc Faus, Banco Sabadell’s Director of Excellence, “these are the results of many years of hard work, which we would not have achieved without our organisation’s clear commitment to leadership and management excellence. We are very happy.” Likewise, Ignacio Babé, General Secretary of the Management Excellence Club, believes that Banco Sabadell “has consolidated its growth thanks to the strategic transformation carried out in recent years from the management and technology perspective, which has been integrated into the organisational culture and has been used as levers for change both internally and externally.” Meanwhile, for Bureau Veritas Spain and Portugal’s Executive President, Bertrand Martin, “this milestone proves that Banco Sabadell is a model organisation in management, innovation, digital transformation and leadership. Business values that are reflected in the outstanding products and services that the financial institution provides to society.”

Banco Sabadell is one of the most consolidated organisations in Spain in terms of quality and management excellence. In October 2018, it received the title of European Excellence Ambassador, and at the end of that same year, the institution underwent a further EFQM assessment, carried out by the Management Excellence Club (EFQM representative in Spain) and by Bureau Veritas, in which it achieved these excellent results. Banco Sabadell renews the EFQM 500+ Seal of Excellence, obtaining a score of over 700 EFQM points for the third time and remains on top of the Spanish organisations with this distinction.

Being a leader in management excellence does not happen by chance. Banco Sabadell has been consolidating its management model for years and the assessments carried out confirm its evolution and focus on excellence.

The decision to adopt the EFQM Model to measure the institution’s level of excellence dates back to 2005. With this objective, Banco Sabadell made a commitment to management leadership and continuous improvement, and underwent for the first time this rigorous assessment under criteria recognised at European level and by qualified external assessors.

In 2006, the first assessment was carried out and this challenge became the first success for the bank, obtaining its first Gold Seal in Management Excellence. This means scoring more than 500 points in the model. Since then, every two years this assessment has been passed successfully.

The consolidation of Banco Sabadell’s management model reached its peak during the 2014 assessment, when it scored more than 700 EFQM points for the first time –a score that the bank would obtain again in 2016 and November 2018. Assessors have highlighted this fact on many occasions since it shows the robustness of our model. No other Spanish financial institution has achieved this score. 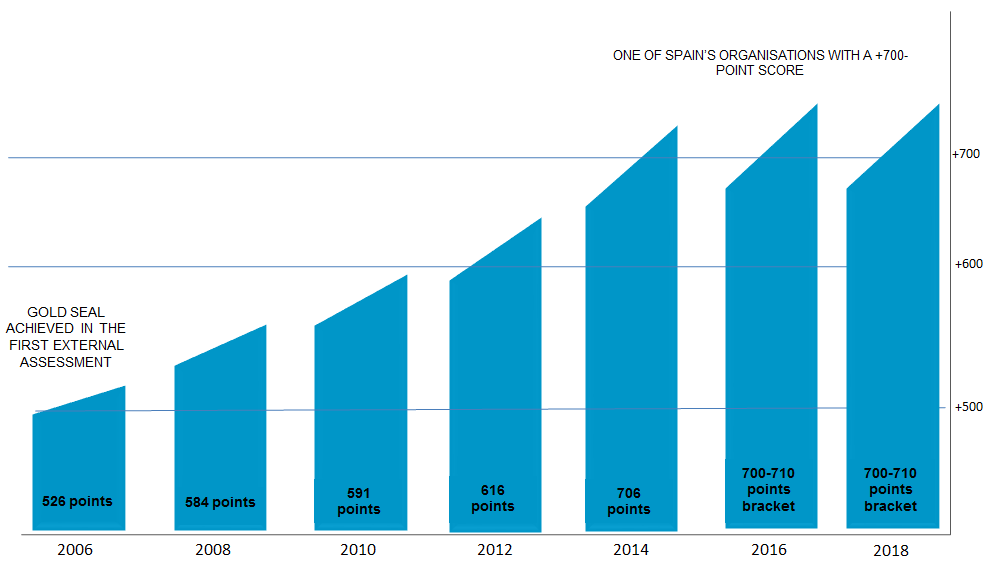 EFQM stands for European Foundation for Quality Management, a non-profit organisation founded in 1988 by a group of 14 leading European companies. It owns the EFQM Model of Management Excellence and its mission is “to become the main promoter of excellence in European Union organisations.”