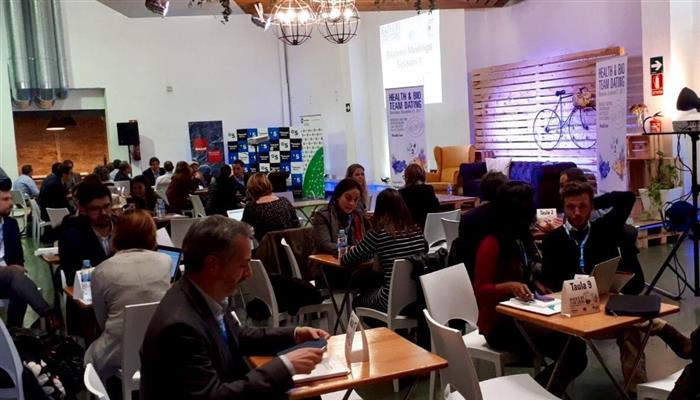 Representatives of a total of 24 biomedical research projects have taken part in the third edition of Health&Bio Team Dating, which took place in Barcelona today. It is the only speed-dating event in this industry, and offers a chance to contact potential partners who can help them attract investment and bring their science to the market. Over 160 sessions were held over a four-hour period as part of this initiative, which has been organised by Banco Sabadell’s BStartup, Biocat and the association of companies CataloniaBio, with the collaboration of 29 universities and research institutions in Catalonia.

“At BStartup we are seeing more and more investors who are interested in the biomedical industry, and in order to cater for this interest we need to find more projects with potential in the healthcare industry”, said Yolanda Pérez, Director of BStartup. “For this reason, we are promoting Health&Bio Team Dating for the third consecutive year, in order to generate synergies between scientists and professionals with a business profile who can help to translate scientific developments into products that can have an impact on society.”

Catalan biomedical companies attracted 153.1 million euros in private investment during 2016, according to the first “2017 Study on investment in biomedicine in Catalonia: Achievements and future challenges”, compiled by CataloniaBio and EY. According to the study, 38% of companies in the industry will have to resort to new financing sources within the year and 28% in 1-2 years.

Pending issue: technology transfer
Albert Barberà, President of the Delegate Commission at Biocat and director general for Research and Innovation in Health at Catalonia’s Generalitat, noted that Catalonia’s BioRegion “has world-renowned research and a growing entrepreneurial sector. What we need to do is bring them together to launch new projects for the common good”.

Assistant to the President of CataloniaBio Isabel Amat pointed out the importance of "scientists having a dual perspective to translate science into a product that can reach patients. Building a good team is key to achieving an attractive business plan for investors”.

The event included an inspirational talk given by the CEO of Mosaic Biomedicals, an oncology spin-off that exemplifies how the synergy between scientists and professionals with business profiles can translate scientific development into products that can help patients. “Together we understood that we needed to speak the same language if we wanted to intertwine science and business and create a solid project with a potential for success,” explained Dr Joan Seoane, Director of Translational Research at VHIO (Vall d’Hebron Instituto de Oncología) and scientist Judit Anido, the co-founders of Mosaic.

“Many scientists believe that doing research and working towards bringing that research to patients are two incompatible things: this is not the case, and Mosaic proves it”, explained Anido. “Professionals that speak both the language of science and the language of entrepreneurship are essential in order for researchers who have been trained in research to be able to share our knowledge with the company”, said Dr Seoane.

Health&Bio Team Dating is consolidating its position as a catalyst of teams that combine science with business. Close to 200 professionals have taken part in the three editions that have been held to date, who have come together in around 440 sessions.

Banco Sabadell agrees not to pay dividend in 2020