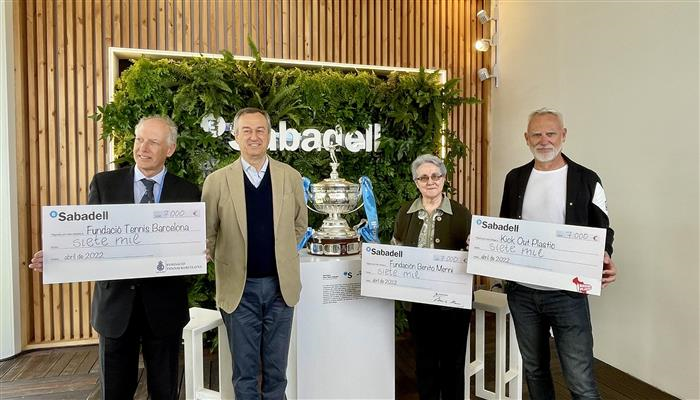 Banco Sabadell donates 500,000 euros to the Red Cross to help Ukrainian refugees and delivers the “aces” funds to good causes

The Chief Executive Officer of Banco Sabadell, César González-Bueno, has delivered a cheque for 500,000 euros to the International Red Cross to help Ukrainian refugee families. The bank has also launched a charity campaign, aimed at both employees and customers, in which it has pledged to match amounts collected from individuals for the International Red Cross, thus contributing up to 1,500,000 euros.

Speaking of this charity initiative, César González-Bueno stated “through this agreement, in line with our social and human rights commitments, Banco Sabadell contributes to the humanitarian aid that is so badly needed by Ukrainian refugees at this time”.

This contribution was delivered during the “Aces Solidarios” event, at which Banco Sabadell gave the Benito Menni Foundation, the Barcelona Tennis Foundation and KickOutPlastic, the money corresponding to the number of aces or direct service points recorded up to now in the Barcelona Open Banc Sabadell tournament. Altogether 21,000 euros were collected, therefore, each organisation received 7,000 euros aimed at promoting the right to mental health in disadvantaged countries, helping young people at risk of social exclusion through charitable weekly tennis classes, and raising awareness of the fight for a plastic-free world.

In this respect, César González-Bueno pointed out that through this charitable initiative “Banco Sabadell seeks to do its bit to recognise those who are committed to helping others in such a focused and dedicated way as these three organisations”.

Since 2008, more than 40 organisations have benefited from the “Aces Solidarios” initiative, which has made a cumulative contribution of more than 320,000 euros since then.

Beneficiaries of the 2022 Aces Solidarios

The Benito Menni Foundation, promoted by Hermanas Hospitalarias, works in the field of development cooperation. It is an NGO that seeks to guarantee the right to mental health in disadvantaged countries.

The Barcelona Tennis Foundation was created in 2019. It currently runs the “Tennis with Values” programme in coordination with Cáritas. This programme enables children and young people at risk of social exclusion to enjoy weekly charitable tennis classes. The Foundation provides resources, instructors and a healthy snack.

Driven by the media power of sportsmen and women, celebrities, and influencers, Kick Out Plastic is an international non-profit organisation that fights for a world free of single-use plastics and the associated environmental problems.