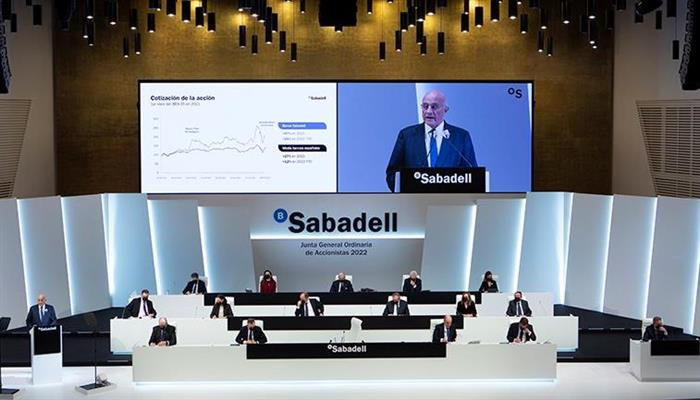 The Banco Sabadell General Meeting of Shareholders, held in Alicante and represented by 56.43% of the share capital, has approved the management and annual financial statements of the Institution for its 140th year.

During the meeting, the non-financial disclosures report was approved, as were the proposals concerning the allocation of profits and the distribution of a dividend of 0.03 euros per share for the year ended 31 December 2021.

The meeting also ratified the appointment of Luis Deulofeu Fuguet as an Independent Director and the re-election of Pedro Fontana García, George Donald Johnston III and José Manuel Martínez Martínez as Independent Directors, at the proposal of the Appointments and Corporate Governance Committee. The re-election of David Martínez Guzmán as Proprietary Director was also approved, at the proposal of the Board of Directors.

The Chairman, Josep Oliu, began his speech with a reference to the conflict in Ukraine, stating that: “The impact of the war in Ukraine has given rise to a geopolitical scenario that is generating uncertainty about the European economies. In any event, all the signs point to further progress in the process to normalise monetary policy, with the gradual reduction of the amount of money in circulation and a subsequent interest rate hike bringing levels above zero”.

Oliu also made reference to two very significant milestones for Banco Sabadell in 2021: the celebration of its 140th anniversary and the fact that “2021 was the year in which, following the efforts made in 2020 to clean up the balance sheet and in line with the roadmap set out by the Board of Directors, the Bank returned to profit, exceeding all expectations”.

The Chairman spoke about the post-pandemic recovery and indicated that “we anticipate rising interest rates, which points to more favourable levels of profitability for the sector in the future, provided that cost of risk can be maintained at moderate rates”.

In addition, Oliu described 2021 as “an inflection point in the Bank’s profitability; the result of the efforts in previous years to clean up the balance sheet and of the cost impact of our restructuring plans”, with which “the Bank has positioned itself on a positive pathway in terms of profitability, with our sights set on ROTE comparable with the cost of capital in the near future”. In this respect, the Chairman made reference to the performance of the Bank’s share price: “It regained momentum last year, with a cumulative revaluation of 67% in 2021, thereby positioning it in first place on the IBEX”.

Towards the end of his speech, Josep Oliu mentioned the creation of the Strategy and Sustainability Committee: “Its creation has enabled the Board of Directors to promote the Bank’s various commitments in sustainability-related areas, such as the Bank’s membership of the Net-Zero Banking Alliance convened by the United Nations”.

In his speech, CEO, César González-Bueno, reflected on some of the most significant milestones of 2021: “A new organisational structure was introduced together with new governance aligned with best practices in the market, the 2023 Strategic Plan was presented and a labour agreement was signed with the entire bargaining table based on voluntary negotiations”. González-Bueno made reference to the good results for the year: “we have ended the year above expectations and are regaining market confidence”.

With respect to the business in Spain, he indicated that “new mortgage lending has surpassed 5,500 million euros this year, 38% more than in 2020. Our market share has risen to 6.6% and increased by 12 bps over the year. New consumer loans totalled 1,481 million euros, increasing by 11%. Our market share grew to 3.7%. New loans and credits to companies amounted to 11,751 million euros, below  the level in 2020 when ICO-guaranteed loans were launched in response to the Covid-19 crisis”. With regard to TSB, he pointed out that “new mortgage lending reached an all-time high, ending the year at a record-breaking 9,160 million pounds, 50% more than the previous year. The market share in mortgage lending stock grew by 19 basis points to reach 2.2%”.

The CEO also mentioned the report on Banco Sabadell’s “Commitment to Sustainability” and noted that the Institution “granted 3,593 million euros in sustainable financing liked to sustainability products or projects.”

With regard to the 2023 Strategic Plan, González-Bueno reviewed some developments: “In Business Banking, we are evolving and promoting growth by drawing on specific levers, such as more specialised solutions for SMEs, new sector-specific solutions for businesses and support with the Next Generation EU funds. In Retail Banking, we are building a digital and remote offering in products where the customer seeks greater autonomy and immediate interaction, such as consumer loans, accounts and cards. And in Corporate Banking Spain, we are focusing on improving profitability, client by client, and on ensuring that the specialised product units generate more income for the Group”.

During his speech, the CEO also made reference to services for elderly customers, and highlighted the introduction of improvements to customer services for seniors: “We have extended our opening hours for cashier services, we have set up a freephone customer service number for customers over 70 years of age, from 08:00 hours to 19:00 hours, and we have set up an incidents service to run 24/7, 365 days per year. In addition, we are going to refurbish our ATMs and have made an undertaking to resolve incidents and faults in less than 7 hours in 98% of cases”.

The CEO concluded his speech with a reference to some of the financial objectives for 2023: “Growth of net interest income to a single-digit figure. Grow our fees and commissions to a mid-single-digit figure by 2023. Cost of Risk target of 45 basis points. With regard to profitability, reach an ROTE target of 6%”.

Banco Sabadell has presented its ‘Commitment to Sustainability’, a framework for action that incorporates the Bank’s strategy and forward-looking vision for the period 2025-2050 in relation to environmental, social and governance commitments, and that aligns our business objectives with the Sustainable Development Goals, and that establishes action levers to generate transformation and promotion activities.

The ‘Commitment to Sustainability’ involves all of the Institution’s corporate bodies and is underpinned by four strategic pillars: Progress as a sustainable institution, Support our customers in the transition to a sustainable economy with mobilisation of more than €65 billion in sustainable finance, Offer investment opportunities that contribute to sustainability and Work together for a sustainable and cohesive society.