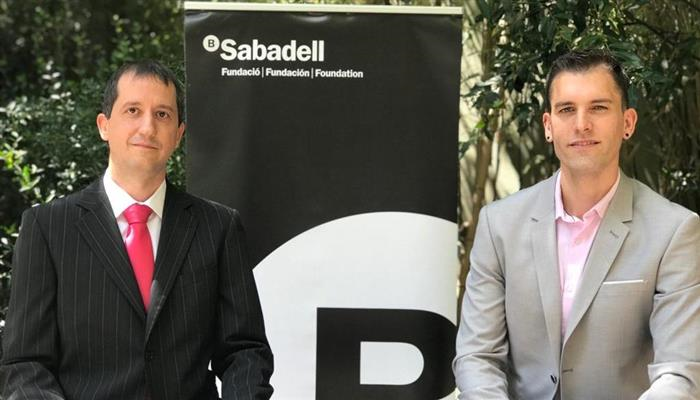 The jury of the 3rd Edition of Banco Sabadell Foundation Award for Science and Engineering has recognised Prof David Pérez García for his contributions in Mathematics and Quantum Information. Pérez García was previously recognised for his work that connects Quantum Information, Banach spaces and operator theory. Meanwhile, the jury of the 14th Edition of Banco Sabadell Foundation Biomedical Research Award has recognised Dr Arkaitz Carracedo Pérez as the 2019 winner for his innovative contribution in the field of oncology and his pioneering work that seeks to understand the development of prostate cancer.

Each award gives out 50,000 euros and aims to recognise the career of young researchers in the fields of biomedicine and health sciences, as well as science in general and engineering.

Banco Sabadell Foundation Award for Science and Engineering has the collaboration of BIST (Barcelona Institute of Science and Technology), chaired by Prof Andreu Mas-Colell, an international authority in the scientific community and also chair of the award.

Arkaitz Carracedo Pérez (born in Bilbao in 1979) has a PhD in Biochemistry and Molecular Biology from the Complutense University of Madrid. After a first postdoctoral stint at the New York and Boston lab of Prof Pier Paolo Pandolfi, he returned to Spain in 2010 to start his own independent research at CIC bioGUNE, with the initial support of the Ramón y Cajal programme and, since 2011, as research professor at Ikerbasque.

Dr Carracedo Pérez has received the award for his innovative contribution to the field of oncology. Specifically, he completed pioneering work to understand the development of prostate cancer and has discovered molecular processes that might lead to new therapeutic strategies based on the inhibition of the metabolism of tumour cells. His research has managed to explain the action mechanisms associated with the response to anti-cancer treatments, as well as the molecular basis of tumour development. Dr Carracedo Pérez’ efforts go beyond research with a strategic commitment to knowledge sharing, whether in his role as university professor or through his socio-educational activities for the general public.

“Banco Sabadell Foundation Biomedical Research Award is an incentive to continue my research to fully understand cancer biology. Since we are not just talking about a single disease, but about more than a hundred, a big part of our efforts should focus on deciphering the functioning of tumour cells. Therefore, I’m grateful that Banco Sabadell Foundation has recognised, through my award and those given to previous winners –accomplished researchers in their own right– that we must capitalise on knowledge today so that tomorrow we can prevent, detect and treat cancer better. I appreciate the Foundation’s research awareness at a time when we must decide, as a country, what is the strategic value of investing in knowledge. Finally, I think that as researchers we have an important responsibility –to give back to society through an ongoing dissemination strategy, via the application of our findings so that they are implemented in our health system.”

David Pérez García (born in Guadalajara in 1977) has a PhD in Mathematics from the Complutense University of Madrid and is a member of the Institute of Mathematical Sciences (ICMAT). After a few years at the Max Planck Institute of Quantum Optics, following his PhD, where he started to work on quantum information theories, he went back to the Complutense University in 2006 to establish the “Mathematics and Quantum Information” research team, which currently has 14 researchers. In 2018, he was appointed Corresponding Academician of the Royal Academy of Sciences.

Prof David Pérez García has won the award for his contributions in Mathematics and Quantum Information. He is a key authority in Physics and Mathematics and is recognised for his work that connects quantum information, Banach spaces and operator theory. The mathematical development of tensor theory applied to condensed matter and his major breakthroughs using operator theory to study Bell’s inequalities are among his main contributions. Finally, based on old 1930s’ ideas from Gödel and Turing, he has managed to demonstrate the undecidability in Quantum Physics.

“I feel deeply honoured, motivated, happy and grateful for receiving this hugely prestigious award. Honoured by the trust placed in me by the jury and Banco Sabadell Foundation. Motivated to continue working every day to improve the quality of my research. Happy for its acknowledgement of many years of hard work, dedication and, yes, some sacrifices. And grateful to all the people that have supported me over the years, without whom I wouldn’t be here, especially my family, my friends and all my fellow researchers from whom I’ve learned so much. No doubt, this award is also yours.”

The Award Ceremony will take place on Tuesday, July 2nd at Banco Sabadell’s corporate centre in Sant Cugat del Vallés (Barcelona) and will gather important figures in the scientific community. The event will be attended by the winners, some of the previous winners, members of the jury, institutional representatives, the medical community, research centres, universities throughout Spain and investors interested in research and science projects, as well as the media.