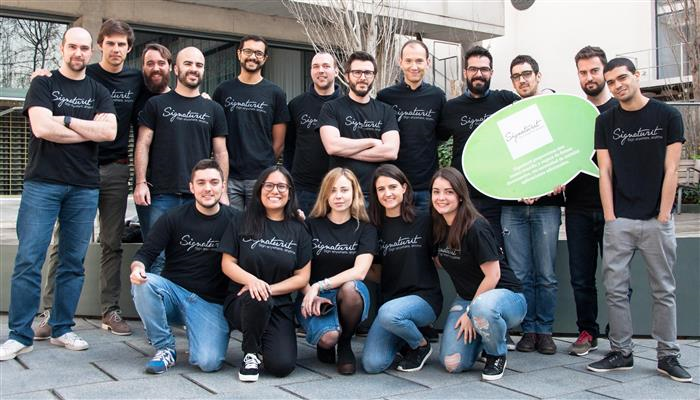 Corporate The three founders of Signaturit: in the back row, the first on the left is Javier Martinez (CTO), and the fourth and the the fifth on the right, respectively, Juan Zamora (CEO) and Salvador Severich (CMO)

20th June 2017 — ESADE Alumni and BStartup, Banc Sabadell’s programme for entrepreneurs, have agreed to grant the 2017 Start-up of the Year Award to Signaturit, a Spanish start-up that allows companies and individuals to request and issue fully legally valid electronic signatures simply by sending an email through any service or platform. Signaturit was selected primarily because of its high rate of growth in a short time, the qualities of its entrepreneurial team, the efficient management of the company’s financial resources and its sales strategy.

The prize will be presented by Xavier Sánchez, Director of ESADE Alumni, and Conxa Oliu, President of BStartup10 at Banc Sabadell, to Juan Zamora, co-founder and CEO of Signaturit, during Alumni Entrepreneurship Day, a day-long event of lectures, debates and panels featuring entrepreneurs and new technologies.

Mr. Zamora commented: “This award is the cherry on top of our successful second round of financing, which closed just a few days ago. Whereas it was the investment community that endorsed our project during the financing process, this award expresses the approval and recognition of ESADE Alumni. Without a doubt, it will give our reputation a boost and new encouragement to all those who form part of this project.”

During its second round of investment last week, Signaturit raised €2.8 million in financing. Since raising €600,000 in 2015, the company has increased its financing fourfold. In addition to Banc Sabadell – which participated in the previous round through its BStartup10 programme and did so this time through Sabadell Venture Capital – the company has attracted capital from the venture capital funds Nero Ventures and Faraday Venture Partners, as well as new investors in the ESADE BAN network such as the Boyser family office.

Since its founding in 2013, Signaturit has built a portfolio of 10,000 clients – 20% international and distributed throughout 40 countries – with offices in Barcelona and Amsterdam and a team of 28 professionals led by Mr. Zamora and his two co-founders, Salvador Severich (CMO) and Javier Martínez (CTO).

Signaturit has received more investment money – €1 million in two rounds – than any other start-up in the history of ESADE BAN, the ESADE Alumni business angels network. With a total of 24 ESADE BAN members involved, it has also attracted more investors than any other company in the network’s history. In addition to the ESADE BAN investors, Signaturit’s main shareholders are Banc Sabadell and the venture capital firms Nero Ventures and Faraday Venture Partners. Since its launch, the company has raised a total of €4.1 million.

The ESADE BAN members who have invested in Signaturit include individual business angels as well as family offices, and the amounts contributed range from €10,000 and €300,000. Signaturit’s board of directors currently includes investors from the ESADE BAN network.