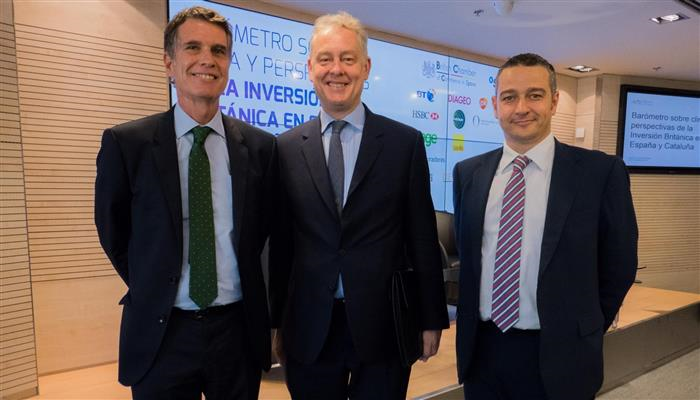 Corporate The CEO for Banco Sabadell, Jaime Guardiola, the British ambassador in Spain, Simon Manley and the President of the British Chamber of Commerce in Spain, Christopher Dottie

Today, the CEO for Banco Sabadell, Jaime Guardiola, met with the British ambassador in Spain, Simon Manley, and the President of the British Chamber of Commerce in Spain, Christopher Dottie, at the Torre Banc Sabadell in Barcelona, the venue for the presentation of the Barometer on Climate Outlook for British Investment in Spain and Catalonia.

Jaime Guardiola reminded those attending the event of the historic link between the bank and the United Kingdom, highlighting that Banco Sabadell was the first Spanish financial institution to open a representative office in London, nearly 40 years ago. These ties have been growing stronger over time, so much so that last year Sabadell acquired British bank TSB.

The CEO spoke of the effects of Brexit, stating that “Spain needs to be an active player in order to ensure that the impact of the UK’s withdrawal from the EU is kept to a minimum”, adding that, “we have a strong level of commitment to the UK, as 30% of our business is in this country.” During his speech, he asserted that “both the United Kingdom and the British Chamber of Commerce in Spain can rest assured that they will always be able to count on Banco Sabadell’s collaboration to ensure that the bilateral relations between both countries continue to be productive and successful.” Today 25% of British citizen who live in Spain are clients of Banco Sabadell, said Jaime Guardiola.

The Barometer presented by the British Chamber in Barcelona, which was prepared by International Financial Analysts (Analistas Financieros Internacionales, or AFI), revealed that the UK ranks third in the list of countries with a direct investment in Spain, creating over 160,000 jobs.  Another notable piece of data is that 67% of British companies located in Spain will not scale back their investments during 2017, in spite of Brexit. The study also shows that the volume of British investment in Catalonia has started to increase after three years of decline. British companies have invested some 546 million euros in Catalonia during the last two and a half years, reaching third place in the State's ranking in terms of their capability to attract projects from the British Isles.

In September this year, Banco Sabadell and the British Chamber of Commerce in Spain signed a cooperation agreement in a bid to promote business and investment between British and Spanish companies. For more information about the Barometer on Climate Outlook for British Investment in Spain and Catalonia, visit www.britishchamberspain.com